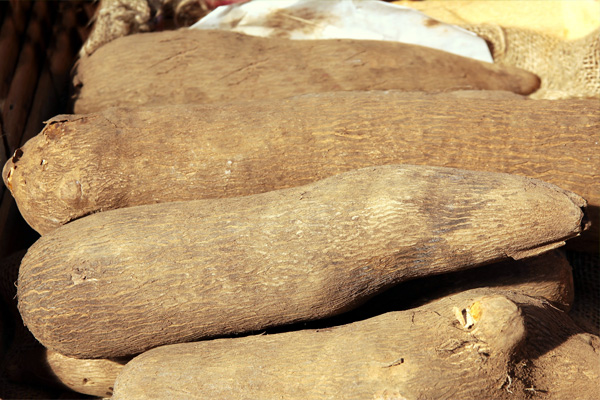 Yams are usually the first fruits of the harvest, the staple food of many peoples of western Africa. The yam is a large tuberous root related to the sweet potato. African yams can be white, yellow, or orange inside (but they still taste sweet) and come in many shapes and sizes: some can be up to a few feet long.

Yams are very versatile and can be cooked in many ways: roasted, boiled, added to soups and stews, fried, mashed, or dried and pounded into flour. The traditional dish is called fufu. This is boiled, mashed yams, with a little butter or palm oil, often still eaten in the traditional way—with the hands.

The Yam Festival is usually held in August to October and is held to give thanks to the spirits of the sky and earth and to ask for a plentiful yam harvest. In some areas of Ghana the festival is known as ‘Homowo’ or ‘To Hoot at Hunger’ and in Nigeria, it is known as ‘Iriji’, which means ‘New Yam’. In Nigeria, the festival is celebrated by numerous communities among whom are the Igbo peoples, the Yorubas, the Edos, Nigeria middle belt people and other various communities celebrate in a variety of ways. The people celebrate by having a parade, songs, dancing and drumming.

The New Yam Festival originated a long time ago because it marks the changing of the seasons, which people in all parts of the world have honoured since ancient times. Many cultures divided the year into two seasons, summer and winter, sometimes known as raining and dry season and marked these points of the year at or near the summer and winter solstices, during which light and warmth began to increase and decrease, respectively. In pre-industrial times, humans survived through hunting, gathering, and agricultural practices, which depend on the natural cycle of seasons, according to the climate in the region of the world in which they lived. Thus, they created rituals to help ensure enough rain and sun in the spring and summer so crops would grow to fruition at harvest time, which was, in turn, duly celebrated. Vestiges of many of these ancient practices are thought to have survived in festivals still celebrated around seasonal themes.

In Ghana to celebrate the ‘To Hoot at Hunger’ Festival women dig up the yams and carry them in baskets above their heads. Villagers gather together as the women and young girls begin to prepare the feast. The choose a young boy to carry the best yams to the festival dinner, and another boy follows him beating a drum behind the other young people from the village march to the beat of the drum and other musical instruments, The Chiefs dressed in colourful robes follow the yams and the young people. As part of the celebration, villagers sing and dance wearing animal masks

In Nigeria, the Yorubas call it Odun Ijesu and the festival lasts for two days, on the first morning of the celebration villagers construct an altar to honour their ancestors, the earth god Ala, and the yam god, Ihejioku. The men go out to harvest the new yams and give thanks in the village square.

On the second day, wrestling contests are held in the villagers that involve the young village. Before they start wrestling the young men eat roasted yams, which they believe will give them strength. Drums welcome the wrestlers, divided into two teams, into the village square. When a wrestler wins a round, drummers beat their drums again, and young women come into the circle and dance.